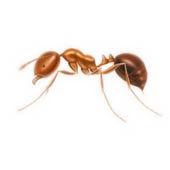 As their name suggests, red imported fire ants are not native to the United States. They originated in South America and were introduced to many other countries through ships’ ballasts.

Habits
Red imported fire ants are destructive and a health hazard. They readily consume many of the same foods humans do.

Prevention
Seal up cracks or crevices with caulk and store trash barrels away from your home. Keep food cleaned up and sealed in airtight containers. Take great care to avoid red imported fire ant mounds. Call a professional pest control agency immediately to eradicate these pests.