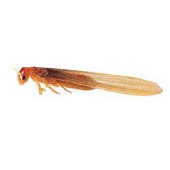 Formosan termites are the most aggressively destructive timber pest known.

Habits
Formosan subterranean termites have a nearly insatiable appetite. They swarm regularly to form new colonies, ready to consume any available timber within a 400 feet radius.

Habitat
Colonies of Formosan subterranean termites prefer to establish themselves in moist soil below the frost line, but above the water table. If there is a constant moisture source, however, they can nest in the upper stories of buildings, directly in the wood.

Threats
Formosan subterranean termites consume moist wood at a rate as high as 13 oz. per day. In just a matter of months, the Formosan termite can cause major structural damage. They can even cause power failure by chewing through electrical cable.

Prevention
It is best to take preventive action prior to construction. Have the building site spayed by a pest control professional with a termiticide, and avoid wood-to-soil contact. Inspect structures for signs of decaying wood. Once they become established, Formosan termites are nearly impossible to eradicate.