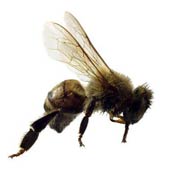 Africanized “killer” bees are known to be in the following states: Arizona, California, Florida, Georgia, Louisiana, New Mexico, Texas, and Utah. They are expected to eventually invade all southern states.

As their name suggests, Africanized bees come from a warm climate and are not expected to establish in areas with cold winters.

Habits
Africanized bees are a species of honeybee impossible to distinguish from their more docile European cousin with the naked eye. They swarm more often than other honeybees and are easily agitated.

Habitat
Africanized honeybees live in large colonies in any hollowed area, including homes and business.

Threats
Although a killer bee’s venom is no more potent than other honeybees, its propensity to agitation is what makes it dangerous. An entire hive can be upset by loud noises and then attack en masse, following the victim far from the hive. A human can be killed when stung enough times, even if they are not especially allergic.

Prevention
Keep cracks and gaps in homes sealed to prevent Africanized bees from entering and establishing a hive. If you think you have killer bees, don’t take any chances. Call a professional pest control agency immediately.